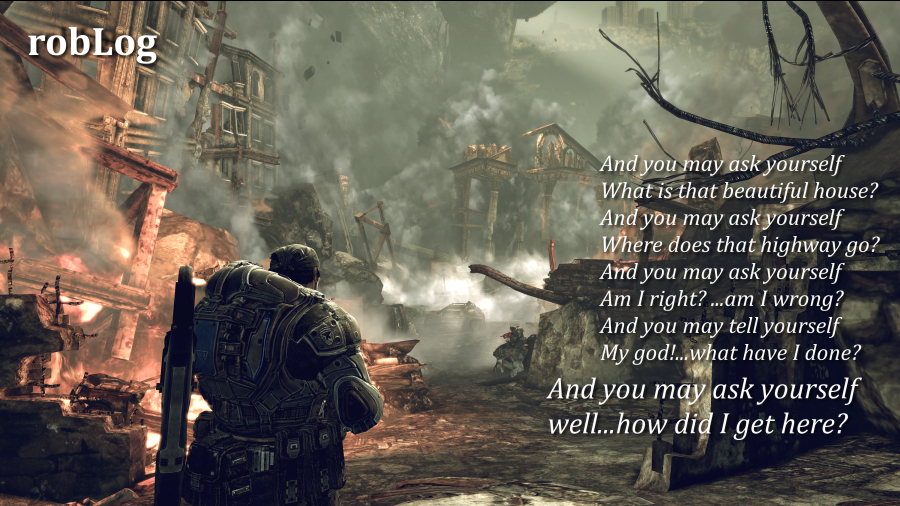 GrE Retro: Critical Thinking and the Chainsaw Gun of Gore

From way back in 2008, here’s an essay that might still resonate with you as we look forward to Gears of War 4 coming out.

Let me know what you think in the comments below – the more things change, the more they stay the same. It’s interesting to note which of the blogs survived thus far; I know I didn’t. I moved on past the long-form video game essay into video gaming freelance news, then into tech/Apple blogging, and now most of my actual writing is about highly technical behind-the-scenes stuff for companies that pay well.

I’ve been trying for a month now to wrap my head around some unifying structure that I can put my thoughts about video gaming into. I’ve wanted to contribute to an Editor’s blog here on Games Are Evil, but just couldn’t find any theme or rationale for doing so.

I want to thank the Brainy Gamer, first and foremost, for introducing what, to me, is a whole new way to approach gaming journalism: a critical discussion of video games and their purpose in our culture. Michael Abbot produces a monthly podcast and a written blog that elevates the field in many ways. The new Gamer Confab structure to his podcast has introduced me to another ton of critical thinking games journalists, including The Quixotic Engineer, Acid for Blood, Design Rampage, Sexy Videogameland, Insult Swordfighting, and Man Bytes Blog, among others. [Editor’s note: these URLs may have moved/changed/gone dark in the eight years since this was originally published.]

The topic that I am seeing discussed across all of these varied and well-written websites is, to my mind, twofold: a desire to think beyond the typical “graphics/gameplay/controller” review to the deeper, perhaps even transcendent nature of video gaming as well as a willingness to ask questions for the sake of finding that deeper meaning. These excellent writers are, more importantly, critical thinkers engaged in both an inner process of reflection and analysis as well as a public, ongoing discussion of these cultural and personal issues. I find that the give and take in this section of the blogosphere to be most resonant with my way of thinking about the world and video gaming.

My theme, therefore, is the question: “Why do we play games?” I’m hoping to spend some time each month here, on other gaming sites, and on our forums, engaged in this very personal and very interesting conversation. I don’t think the point is to answer the question, but to think about it deeply.

And Let Slip the Gears of War

So let’s get right to it. I’ve been playing Gears of War 2 quite a bit lately. For me, as a father of two young children, a husband and full-time employee with a web design business on the side, video gaming is something I need to shoehorn into my life as I can. With my duties here as Associate Editor, as well as Portable Editor and general web-hack, I’ve been playing a lot of games on a lot of consoles.
So, for me, playing a game quite a bit means more than an hour at a time. It means devoting the kind of time many other gamers take for granted, in 6 or 7 hour shifts. Yes, I’ve spent that kind of time on this game. Why is that? What is it about this game, in particular, that has me hooked?

Let’s look at that question a little deeper. I’m a fairly non-violent guy. I abhor physical violence and warfare as a solution to ANY problem, large or small, private or national. I think boxing is a barbaric and ultimately stupid sport, and killing things with weapons is something I’ve never done in real life. I’ve played many violent games, though I tend to shy away from the more realistic ones, like Call of Duty, or Grand Theft Auto. I just can’t make myself do it.

I can, however, play games with more science fiction or fantasy violence. If it’s swordplay, or laser beams, I’m able to get past my hesitance. The closest I’ve come to realistic gaming is Resident Evil, or Doom, wherein the enemies are clearly monstrous and horrible. There is little or no connection to a real human involved. Which, in its own way, is how I was able to connect to Gears of War in the first place. It was sci-fi themed, which is right up my alley, the enemies are fully non-human, and it had an immersive storyline that felt, to me, like a movie I was taking part in. I was able to get past the realistic ammo and “hoo-rah!” attitude of the main characters. The tight controls and the mechanic of cover and fire really brought me further into the game, as it’s how I’d probably react in a real bullet-fight: I’d hide, and take shots at available targets.

Violence Isn’t the Answer, Is It?

So, along comes Gears of War 2. It’s horribly violent. Death is gory and messy and loud. I’ve walked through rivers of blood, and chainsawed locusts and wretches with aplomb. I don’t cringe when my teammates cheer at the end of a particularly difficult Horde level, or when Marcus Fenix says something incredibly military. I’ve been known to yell, “Suck it!” into my XBox 360 microphone during a pitched session of Wingman. Who is this guy I’ve become? And why am I allowing it to occur?
The answer is, of course, complex and full of ambiguity. I’m going to mention a couple-three things, though, that seem to help me understand this phenomenon: participation, immersion, and gaming resonance. There are a lot more things that inform my thoughts, but these three, for now, are what I want to talk about. In the interest of furthering the discussion, I’d like to point you all to the comments, below, as well as the forum thread associated with this post. Let’s have a discussion. Why does this game resonate with you?

Participation is the sense of, as Mr. Abbot says in one of his Brainy Gamer podcasts, being part of the discussion. I bought Gears 2 on launch day, and brought it home. When I popped the disk into my Xbox, my entire friends list was playing the game. It was the first time I’ve been there from the beginning (I got Halo 3 a full year after release, so that tells you the kind of buyer I am, as well). Suddenly, I was one of the cool kids, engaged in a discussion of which levels were great, how the multiplayer was shaping up, how far I’d gotten in the single player storyline, etc. I was, finally, part of the discussion. So here I am sharing it with the blogosphere, to get a broader perspective, as it were. This participation is immensely appealing to me, and goes beyond the simple, “now I’m cool” dynamic that I half-flippantly state above. It’s the same feeling I get from playing through Fable II, and then reading about it in articles like this excellent series of posts by Corvus over at Man Bytes Blog. If you have Fable II, I highly recommend going to read what he has to say.

Now that I feel a part of the ongoing conversation, what also resonates with me is the immersion Gears of War 2 allows me. I’m taking part in a scifi action movie with all the high quality audio and video that implies. The story is only one part of the equation in any Hollywood blockbuster, and that’s also true here in the game. The music, sound design (bullets whizzing, chainsaws buzzing), and incredibly high-resolution graphics and animation complete the scene, if you will, for my falling in love. It’s like high-octane candy for the mind, with the extra-added value of being able to control the main actor for the stunt scenes. In addition, as I mentioned above, the gameplay mechanics fully mesh with the way I would act in a similar situation (if, of course, I were a highly-trained, foul-mouthed, cynical son of a bitch embroiled in a huge world-ending war with similarly equipped monsters coming in wave upon wave against me). I’d duck, hide, roll, vault barriers and throw grenades. I’d use long range weapons when possible to avoid up close fighting, and melee only when there’s no other option. This is immersive in the sense that it meshes with the way my brain already works, placing me into the action and story without realizing that I’m really only sitting on a couch, pressing colored buttons at specified intervals.

Marcus Fenix, at his best, resonates with me on another level. If I was the veteran of hundreds of pitched battles, with only my comrades and wits and serious boxes of ordinance to protect me and my world, I’d be just as cynical and battle-weary as him. I can sense his frustration and disgust with what he has to do. He’s a human being, in other words, who does what he has to do because he’s good at it. Who can’t relate to that? The designers of this game really kicked up their story a notch with the way they characterize the main people in the game. I wish they’d gone a bit more into Dom’s worry for his wife, though I haven’t completed the main single player story yet (I’ve sunk most of my available gaming time into the Multiplayer action), so I can’t comment too much on whether they fulfill the promise of such a characterization premise. But again, who can’t relate to worrying about your loved ones? I worry about my partner and children when they’re a few minutes late getting home from school pickups. How much more intensely would I worry if they were missing, and I in a state of warfare with humanity’s future balanced on my personal actions? It’s all resonant with me. If the heroes of this story enjoyed what they were doing more than they do, I would probably not be such a huge fan of the game. Yes, it’s satisfying to yell at a nasty alien that almost got the drop on us with their own blunt-edged power-tool, but I only allow myself to do so with the understanding that I have no choice.

In conclusion, I hope I’ve been clear about what I want to do with this, my little piece of the blogosphere. Video gaming has become, in my view, something worthy of a critical analysis and depth of thought that goes beyond the typical review or fanboy site. It’s my intention, with varying success, I’d guess, to spend time talking about my own reasons for gaming. Why do we game? There are as many answers to this questions as there are gamers. I hope that this post has begun the process for any one of you to begin thinking about your own gaming perspectives. I, for one, am by no means finished with my talking and thinking about this game. The joy of such a huge triple-A title is that there is a ton of content and plenty of modes to get through, experience, and enjoy. So, stay tuned for monthly posts in this vein, and let me know what resonated for you in the comments, or on the forums.